skip to main | skip to sidebar

The beginning of The Epilepsy Cure - my story

The kitchen light illuminated the mobile home in the dark early morning. Even the cows had not begun to wake up. The roosters, perpetually confused as to what time it was, had already woken up at 3am to announce the day before going to sleep again. Only my mother and I were awake. My 2 sisters were not in any mood to get up before it was absolutely necessary to make the trek to school. My stepfather snored loudly from the bedroom.

"Morning," I said as my mother passed me in her peach bathrobe.

"Morning." She shuffled past me to the coffee pot.

I moved out of her way. I got some milk out of the refrigerator and started to walk back to the bathroom. Then something odd happened. I shook. It was like an invisible being had hit my arm, sending the milk flying from my helpless hand.

What happened? I looked quickly at my arm and then on the milk, which had at least spilled on the linoleum. The carpet had maintained a light beige color for the most part and my mom was very intent on keeping it that way. She hated it when the goat got inside.

My mother went on grumbling something, but like any good 14 year old I turned her voice down in my head to listen to my own thoughts as I sopped up the lake of milk. At least it wasn't glass. I didn't understand what had just happened, but I knew it was a crappy start to a morning.

I went into the bathroom and that's where I exit the scene.

To me, a seizure is the most frightening experience I can think of - by far. As risky as I was in the past, absolutely nothing has made me feel the pure, thick fear of a seizure. It feels like something very, very dark and sinister slipping into my body as if I were a glove. It could also be likened to the movie the Matrix when Mr. Smith, (who has epilepsy, by the way), takes over a human's body, electric pulses eliminating the guy being replaced. Sometimes it happens in slow motion and I look at my arms locking up, knowing that I'm not in control of them anymore. I can't move. I can't cry out for help. I am alone with the beast inside of me. I can see why people thought that epilepsy was demon possession because that is exactly how I would imagine it could feel. There is nothing like it, but I have come to know this grim feeling well since that morning in the bathroom.

Everything went black and I can't remember anything more about that day.

My mother heard me fall, my head dropping like an egg onto the bathtub and my body crumbling limp to the floor. My body blocked the door to the small bathroom. My mom came running to see what had happened, but could only watch helplessly at the door as I thrashed on the floor, pounding myself between the bathtub, toilet and wall. I now know what it would feel like to have a battle with myself. I'm stronger than I had estimated. Blood and saliva trickled from my face as I bit my tongue hard, completely unconscious.

After minutes of watching, horrified and most likely screaming, my mother saw me clentch every muscle in my body through the crack in the door. I started to turn blue. I wasn't breathing. My mother tried to get in, but my neck was now bent awkwardly against the door. She struggled to reach in to move my body, fearing that my neck could break if she shoved open the door. Still frantically reaching her arm through the crack in the door to push my shoulder down so she could get to me, I stopped, started to breath and my face regaining its pink tone.

It took about 3 minutes. That is a long time for a mother to watch helplessly as her baby looks like she's violently dying before her very eyes.

I have no recollection of falling, convulsing, getting back up or the rest of the day. The days that followed were foggy.

This was my first seizure in front of someone. A few months earlier I had stayed up late at a friend's house and I was found acting very strangely in the morning after I had had an unseen seizure. I was not speaking, kept climbing and falling down the stairs. I did things like brain sucker impressions on people as my friend's family watched concerned. Taken down to a chimp-like and cuddly level, my brain tried to get its bearings on the situation. The doctor I saw said I was on drugs, which did nothing to help the tension at home. I could be very dramatic and depressed - the last thing I needed was for my family to think I was getting into drugs. This seizure, however, was quite clear. A cascade of hospitalizations, EEGs and an MRI followed. I was immediately put on dilantin, an anticonvulsant with side effects I am now learning in medical school. Now I really am on drugs. Highly addictive, mind altering drugs... and they're not even fun.

"You have epilepsy," my neurologist told me. "This is not something that goes away. You're going to have to be on these medications for the rest of your life."

Translation: "We don't know why you have seizures, so we're going to stop asking 'why'. You are not an individual because that is much too complicated and I don't have the time for it." 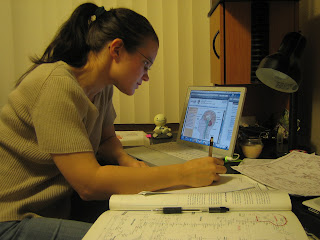 There are over 150 causes for epilepsy. By Congress's accounting office, only 20% of conventional treatments have been proved. Money governs the way we feel about disease. If you believe what is slathered on billboards and commercials, your body - unlike your ancestors before you - cannot function on it's own. You need medication, vaccines and possibly a gastric bypass surgery to have any kind of normal life.

That same doctor told me that I should never go to medical school because it is much too strenuous for an epileptic. Thank God my school doesn't know that; I'm one of the best breakdancers there.

Doctors can be wrong. They aren't all blathering idiots - the vast majority of patients, including myself for over a decade, do the bare minimum in order to combat their disorder and they are merely playing the odds. Doctors, as a whole, are altruistic and caring. For both patients and doctors, taking pills is easy.

Then you start to notice side effects -

...and so on. Suddenly, living like humans have for centuries getting exercise, sunlight, sleep, raw foods and water doesn't seem like that big of a deal.

Even if you don't have epilepsy, you can follow me on my path. Many changes I make are applicable to everyone. I will be under the guidance of several naturopathic physicians, a neurologist, a homeopath, a psychologist, a dentist and a doctor of oriental medicine & acupuncture. This is my team.

This is not going to be easy. It's not going to be fast. But I will come out of it able to tell my patients, "If you can find the drive inside of yourself - and it is there - you can do anything you want to do. You just have to put your mind to it."
Posted by The Epilepsy Cure at 7:16 AM No comments:

The Epilepsy Cure
Everyone has something about themselves that they would like to change. I happen to have something that people tell me is unchangeable. This is MY view & it shouldn't be used to guide your health. Do your research. :)